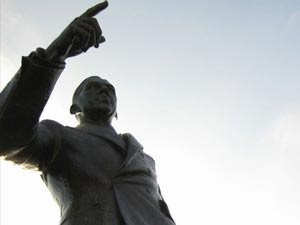 In very general terms, I talked a tad bit of shit about Minnesota's "greatest" governor Floyd B. Olson in CounterPunch﻿ a couple weeks ago (see post below). Somewhat surprisingly (I assumed most people thought of Olson as the name of a highway), I received a few emails, in state and out, informing me I pretty much had no clue what I was talking about. True, if you compare Olson to Mark Dayton (who I find likable), he comes off as a scary Bolshevik. But that's hardly a correct comparison. Olson was governor when labor was at the peak of both its consciousness and political power. In that context, he was more like a brake than a spearhead. He was a check on power. (He threw labor leaders in jail during the '34 Teamster Strike while business leaders were literally killing people on the streets for god's sake.) I suppose I shouldn't be surprised given Minnesota's bizarre compulsion to turn politicians into faultless martyrs. (Cough, Wellstone, cough.)

October 29, 2020
I voted for Joe Biden and hope he wins. I’m also alarmed at the increasingly transparent alliance between the Democratic Party and influential sectors of corporate America, namely media conglomerates and the technology industry. (Their relationship reminds me of the Republican Party and the energy industry.) It’s true there are conservative media outlets that are not friendly to Democrats, but it’s far less certain how objective the “paper of record” and other “serious” media would be to a post-Trump and post-COVID Biden administration that is politically and ascetically their peer. (I would say we are at a point of competing Pravdas, but that would be a slander against the Soviet newspaper’s pre-Stalinist period when it was a battleground of ideas.) Perhaps even more damning is the Democratic Party’s relationship to the technology industry, particularly when companies like Twitter and Facebook have shown they are prepared to unilaterally decide what’s true and what’s false. Not many
2 comments
Read more
May 06, 2020
I’m somewhat familiar with the story, but haven’t seen the tv series “the plot against America.” Is it any good? I’ll admit I have doubts that will be difficult to overcome. My guess is it’s a well stylized but historically simplified attempt to frame international liberalism, particularly the US dominated post war order, as something deeper than what it has become- a value championed almost exclusively by the cosmopolitan elite and global corporations. I also predict that the entire post WW1 context (three months involvement and almost 120,000 Americans dead, split evenly between fighting and the flu pandemic) is lost to Lindbergh and his anti-Semitism. Is this accurate? “The man in the high castle,” another alternative history book made into a tv series that I actually did watch, missed an opportunity to dig into American militarism by not really explaining why so many high level American military members joined the Nazis. (We were supposed to believe it’s just because the Germans wo
4 comments
Read more

December 16, 2017
https://www.washingtonpost.com/national/health-science/cdc-gets-list-of-forbidden-words-fetus-transgender-diversity/2017/12/15/f503837a-e1cf-11e7-89e8-edec16379010_story.html?utm_term=.9280df07ab70 I feel like this may be one of those stories that is quietly walked back in a week or so. Government bureaucracies are nothing if not committed to absolutely staying the same, and they can get around a word ban with little change in intent. Trump is hilariously committed to breaking brains of the liberal pundit class and his half-wit base loves it. It’s really all he has, as he hasn’t been able to get much else done. (Please don’t remind me of the tax bill that is all but certain to become law.)
8 comments
Read more