The "Citizens' Council for Health Freedom" are scumbag shitheads 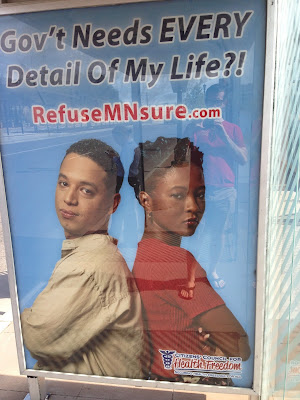 There are plenty of things wrong with Obamacare. Namely, it subsidizes rather than abolishes the parasitic insurance industry. That said, this campaign (I found this propaganda poster near my apartment at a bus stop off University Ave. in St. Paul) is disgusting. You don't have to be terribly clever to see the undertones of this smut. Black people, bus stop. We get it. In the generalized world of demographic based advertising, that group of "takers" are the ones who will be using the subsidies offered to lower income people, so we'd rather you not have any healthcare than participate in government supported access to private insurance.

And that's the kicker. The fucking insurance is private! Since when do these shitheads have a problem with government money going to private industry? Their ham-fisted ideology somehow tells them a market exchange for private insurance is "big government." They are lying to people with the hope they don't receive proper medical attention. How awful. On the ladder of social decency these scumbags are a step slightly above child pornographers.

Blogger said…
If you are looking for a reputable contextual ad company, I suggest you check out Chitika.
11:34 PM, October 02, 2016

December 16, 2017
https://www.washingtonpost.com/national/health-science/cdc-gets-list-of-forbidden-words-fetus-transgender-diversity/2017/12/15/f503837a-e1cf-11e7-89e8-edec16379010_story.html?utm_term=.9280df07ab70 I feel like this may be one of those stories that is quietly walked back in a week or so. Government bureaucracies are nothing if not committed to absolutely staying the same, and they can get around a word ban with little change in intent. Trump is hilariously committed to breaking brains of the liberal pundit class and his half-wit base loves it. It’s really all he has, as he hasn’t been able to get much else done. (Please don’t remind me of the tax bill that is all but certain to become law.)
8 comments
Read more
October 29, 2020
I voted for Joe Biden and hope he wins. I’m also alarmed at the increasingly transparent alliance between the Democratic Party and influential sectors of corporate America, namely media conglomerates and the technology industry. (Their relationship reminds me of the Republican Party and the energy industry.) It’s true there are conservative media outlets that are not friendly to Democrats, but it’s far less certain how objective the “paper of record” and other “serious” media would be to a post-Trump and post-COVID Biden administration that is politically and ascetically their peer. (I would say we are at a point of competing Pravdas, but that would be a slander against the Soviet newspaper’s pre-Stalinist period when it was a battleground of ideas.) Perhaps even more damning is the Democratic Party’s relationship to the technology industry, particularly when companies like Twitter and Facebook have shown they are prepared to unilaterally decide what’s true and what’s false. Not many
2 comments
Read more

February 07, 2015
I find some perverse solace in knowing someone has to handle my piss, right there in front of me, in order to tell if I've been a good clean boy, or whether I've been dirty and bad. I hope there's at least a brief moment of " good god, what the fuck am I doing" (now she's tipping the capped piss container on its side in order to write something I assume is highly technical medical jargon on it.) Is it warm enough? Like baby formula, you have to warm up fake piss in the microwave before you can pass it off as your own. (The microwave wattage is important. I don't think altitude matters though.) I don't even know of any gods who care about piss temperature.  I know it's not her fault. It's a job. But holding piss, even if you label it a "specimen," is still a depressing way to sustenance. It's only slightly better than being a bill collector, a stock broker, or the President. We do share a bond. An unspoken understan
6 comments
Read more